What changes will this pandemic bring?

I set out some of the changes that occurred as a result of the Black Death in a recent post. It was the end of feudalism. Other countries experienced similar upheavals. I do not expect everything to go back to ‘normal’ once the present pandemic is over. 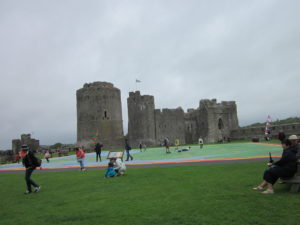 Pembroke Castle. The Black Death brought many changes to the Middle Ages.

What economic changes do I expect ?

Many economists fear a worldwide recession. Some think it could be averted by concerted international efforts. That means the US, China and the EU cooperating. Go on, laugh if you must. Of course, if they do cooperate, it will mean an end to America-first and similar nationalistic policies elsewhere. That would be a major change.Whatever the rest of the World does, within the UK, it will require continued large-scale government intervention. Will the Conservatives see that need, or revert to their belief in the Market? Will the cross-party consensus continue or will divisions open up?

That’s called ‘macroeconomics’, but what about changes in the way businesses and individuals operate?

Many of us have had to rely on the internet for almost everything: shopping, banking, communicating with friends and family. Anyone who can has been working from home. Will everyone go back to the old ways? I expect many will miss such things as face-to-face contact and hands-on shopping. Yet many will decide they didn’t miss the boss breathing down their neck, the colleagues chatting about football, the office politics, the moans, and the commute. Will office space become redundant? Some people will not miss queuing in the supermarket, and some shoppers have said they all too often found shop assistants of little assistance. They might have been doing better online, once they got the hang of it. As the high street was under pressure before, this could be the end for at least some town centres?

Will there be changes to the environment?

Already, people have recorded lower levels of pollution in many cities.

Will the gains be lost as soon as the economy recovers? This could be an opportunity to put resources into sustainable industries, rather than the ones that burn fossil fuels or rely on long-distance transporting of goods or people.

What of unforeseen changes?

I have set out the changes that I and others have been able to imagine, based on available information. Those are ‘knowns’ and ‘known unknowns’, but there will also be ‘unknown unknowns’. They could be good or bad. I don’t suppose anyone thought the Black Death would destroy feudalism and bring on capitalism! Man with question mark. Who knows what changes are coming?

What changes do we want?

Is this an opportunity to influence the World, or at least the UK? Do we want to keep some of the things we have gained recently, such as improvements to air quality, new ways of working? Will we safeguard the NHS and look after old people better? What else? Think about it! Perhaps you can be part of the change.