Garden Secrets is what?

Garden Secrets is the name of the short story I have written which connects book 3, The Stallion Man, and  Book 4, Blood in the Heather: Rumours, Rebels and Rogues, of my Highwaypersons series. 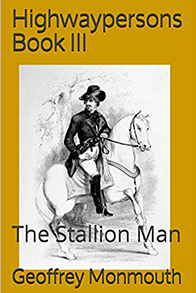 If you have not read The Stallion Man, you will still enjoy the forthcoming novel, but you will be missing a good read. I posted Chapter 1 of Garden Secrets previously. The story continues here.

One night Helen lay awake. Were the boys just being fanciful? Surely, if anyone had the audacity to hide in full view like that, it was Charles Butler. He did know how to disguise his appearance. Could he also disguise his voice? It was hardly beyond the bounds of possibility. Why did the gardener spend all his time away from the house? Why had he moved out when the family had moved in?

She also remembered all the times she had spent in Charlie’s company. The arguments – fights even – and the teasing, the fun, the danger. Did she want to see him captured and brought to justice? What would that mean? Hanging – plus drawing and quartering. Or beheading, being an aristocrat. Did she want that? There were times when she would gladly have killed him herself. But really? Yet he was an enemy agent, a Jacobite. He would see the government overthrown and a new order imposed, possibly in collusion with Spain or some other foreign power.

She told herself she was as bad as the boys. She had little of substance on which to base her speculation. What she needed was facts. She had never even seen this man close enough to be sure of her own opinion. That was partly because she had been busy with other things, but also because he always kept to the far end of the garden and had his back to her, his head bowed as he worked.

Helen resolved to find a way to speak to him, but she would have to make it seem natural. She must not alert him. Neither did she want to offend him if he was some Irish labourer doing an honest job. She needed a plan.

By morning, Helen was still uncertain how to proceed, when Meredith Evans called in to ask most solicitously if everything was satisfactory. That gave her an idea. As she walked with him back to his one-horse carriage, she said, “I do not mean to impose, but perhaps you would humour me and assuage my curiosity.”

His smile widened as he bowed his head slightly. “Naturally, madam, I will do all in my power. How may I assist you?”

The man looked surprised, but said, “Of course! I will bring it tomorrow.” He turned and bowed from the waist before clambering unsteadily into his carriage.

Meredith had hardly departed when Lewis said to his mother, “I’ve had another look at old Mary when I took her some of Cook’s welshcakes. I’m sure she doesn’t look much older than you. It’s hot today and she’s taken her coat off. It makes her look much younger.”

Helen asked Kenneth what he thought. He said, “I haven’t seen her close up, but even if she is younger than we thought, does it matter? There are poor women of all ages. She’s not doing any harm. Or do you and Lewis think she’s another Jacobite spy? She’s not going to learn a lot around here that would be any use to anyone.”

Helen went out into the garden. In the distance, O’Neil, or whoever he was, had taken his shirt off and was digging in the same area as before. She thought of something she could ask but reminded herself to keep it innocent and not to put any inflexion into her voice to betray her suspicions.

The man stood up straight and stretched as he turned to face Helen. His voice showed no hint of anxiety. “Would ye mean me, mam? It’s Hugh. Hugh O’Neil.”

She had intended to scrutinise his face, but found her eyes fixing their attention on his body. It was a nice one. She thought he was a little darker as well as more muscular than Charles, but then, hard manual work in the sunshine could have made a difference. She also thought Charles was a little taller than this man, but remembered that he always wore boots with high heels, whilst this gardener’s boots had flat heels.

Helen responded to his correction of her. “Oh! Sorry. I must have misheard. Can you tell me what plans you have for the other end of the garden, by the house?” She directed her eyes to his face as he spoke again.

“Ah, well, now. It’s funny you should ask, so it is. I’ve been tinking about dat meself. You see, auld Mary – you know – the auld woman that comes here a lot – by de way, I hope ye don’t mind, she’s a poor woman with nobody and she’s doing no harm, so she’s not.”

Helen tried to hide her impatience at this digression. “Quite. I don’t mind her coming here and I’ve told Cook she can give her whatever food we can spare, whenever she comes. I might even give her the odd copper at times.”

“Yes, well, what we you going to tell me about Mary that has some bearing on your plans for the garden?”

“Ha, yes! Sorry, mam, I got lost did I not? Well, I was just saying Mary says tings are planted dere, next to the house. She isn’t too sure what, mind, but I wouldn’t want to be disturbing ’em. I’d rather wait until Spring and see what comes up.” He paused awkwardly for a moment. “Err, unless you want to say different. I mean, it’s your house, is it not?”

Helen realised that she had approached Hugh from the wrong angle. The sun was behind him, almost silhouetting him and slightly dazzling her. While she tried to think of an excuse to move around him, she became aware that she was squinting at him. She hoped he did not interpret that as a sign of her suspicion. Then it occurred to her that he would probably interpret it as a sign she was attracted to him, which in fact she was, but she was trying to keep this knowledge from herself as well as from him.

As Helen began to turn away, Hugh said, “Oh, err, if it’s all right, dere’s something I was meaning to ask ye, if ye’ve got a minute. So there is.”

She had not thought he might want to question her and she felt a little nervous as she turned back, taking the opportunity to move sideways to get the sun out of her eyes. “Of course, Hugh. What is it?”

“I was just wondering, like, if ye don’t mind, about me wages. Ye see, just lately, Mr Evans has been bringing dem every Friday, but now you’re here, am I to be getting dem from yerself?”

It was something she had not thought of, but she remembered that Evans was coming the next day with Hugh’s reference. She could ask him then. She kept moving in a semicircle around Hugh, keeping her eyes on him, as she spoke. Now his face was a little clearer, but not enough. His long bushy hair was similar to Charles’s except for being red whilst his was black, and it was unkempt whereas Charles was always immaculate. It almost covered his face, as it was loose, whereas she had noticed that most men tied theirs back when doing manual work. Most of what his hair did not conceal was hidden by his beard. She stepped closer. He squinted as he found himself looking into the sun, and stepped back into the shade of a conveniently-located tree.

Hugh continued, even as he moved, “It’s not dat I was wanting to cause ye any trouble, mam, only I wanted to know, like, if I should be looking for ye on Friday or waiting for Mr Evans to come.”

“I don’t know. I’ll ask Mr Evans tomorrow, as I’m expecting him. Then I’ll tell you what he says. Don’t worry! I’ll be sure you won’t be worse off because I’ve come.”

Helen felt very hot as she walked back to the house. She told herself that was because she had been standing in direct sun for a few minutes. What other reason could there be? She had a wash, changed her dress for something thinner and sat in a shady spot in the library to read some correspondence.

Chapter 3 of Garden Secrets will be coming soon. I hope you enjoy it and will soon be ready for Chapter 4 and then for Blood in the Heather: Rumours, Rebels and Rogues..