Marx, how can he help us study history?

Karl Marx is famous, but not as a historian

Marx was an economist, wasn’t he? Or you might think he was a politician. He certainly had a lot to say about economics and you can’t separate that from politics. However, Marx was not actively involved in politics, as he was mainly a writer. (We don’t get involved in the real world too often!) I can’t hope to sum up Marxist economics here, but I will say that he thought businessmen made profits only by exploiting their employees. Even if you reject that idea, it’s worth considering what it says about how capitalism works. You might ask whether any other system could or does exist. By the way, what I said about Build Back Better does not make me a Marxist!

How was Marx a Historian?

Marx analysed history in terms of the class struggle. He defined class by how you make your money, not by how much you make. For him, the different classes were: landowners, capitalists and employees. He defined capitalists as the ones who owned the machinery in the factories where the majority of employees worked. They were usually the owners of the business too. He later added the fourth class – the entrepreneurs. These are people who bring the others together to make business work, where nobody in the other classes was doing it. You might notice a few other classes exist: self-employed, professionals, financiers. Some people add them to the model, but others shoehorn them into Marx’s categories. I don’t think it matters, as long as you get his general point.   Karl was not the first to identify different types of income from different economic activities, but he made it the basis of his study of history in a new way.

Why did Marx think class was important in history?

Marx saw history as a series of power struggles between the different classes. The mediaeval barons (landowners) lost economic power to the middle class capitalists as the economy developed. This led to political conflict as the landowners had been the ruling class until then. Everyone ignored the working classes until they became important through trades unions and political activism. That is an oversimplification, but there is something in it and it helps us understand an aspect of history and of politics today.

Do you hate Marx?

Karl Marx has become the bete noir for many politicians and journalists. I suppose they have to have one. Of course, the rich and powerful don’t like anything that might threaten their wealth and power. Karl was wrong about many things. In particular, he made predictions about the collapse of capitalism and the coming of err… Marxism? He was wrong. Does that mean he did not have anything useful to say? For me, his contribution to the study of history is as important as his economics, even though I think it was a great oversimplification.

Would Marx approve of my writing?

I don’t know if he was interested in historical novels, but he would be disappointed at my lack of emphasis on the class struggle in my latest book, set in the early days of the English Civil War. There’s plenty of conflict, but the characters of different classes take sides for various reasons which have nothing to do with how they get their income. Blood and Secrets: Three brothers, two sides, one murder: Amazon.co.uk: Monmouth, Mr Geoffrey: 9798694473569: Books 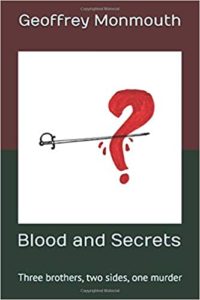 Would Marx approve this story of conflict regardless of class?