Should schools teach about the British Empire?

What do schools teach about the British Empire?

In many schools the British Empire is a subject that nobody ever mentions, at least in class. This seems to be because teachers are afraid of offending children of non-British origins. However, some people are now suggesting all children should learn something of that part of our – and their – history.

Why is the British Empire a difficult subject?

I have heard that there was a time when many schools taught this subject as if the British were bringing civilisation to savages. Perhaps I was lucky. At my school, we had more balanced teaching, showing that there were many motives for creating an empire and there were costs and benefits to Britain and to the Empire. However, I believe that many schools have taught only the negative side, making the British the villains and the rest victims, as if  we should all be ashamed, if we are white. I can see why many schools prefer to leave the whole subject off the curriculum.

One aspect of the Empire is that the guns of white hunters facilitated the slaughter of a lot of big game, whilst the British Empire opened up new markets for the ‘products’ of such activity. 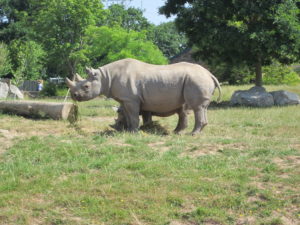 An endangered species: the white rhino

What do I know about the British Empire?

I am old enough to have known a few people who lived and worked in the Empire in the first half of the twentieth century. They were not all the same, but few were like the caricature you sometimes see. They had different motives for going out there.  Some played positive roles in the development of the countries where they worked, such as one who built a lot of railways in India. Many were patronising in their attitudes towards the native peoples they dealt with, but few were really racist. Therefore, I know enough to know how dangerous generalisations are.

Should the British Empire be back on the curriculum?

Firstly, I am delighted that some people want History on the curriculum!, as I have argued before. Any history. But I do want that to include the history of the British Empire. I just want the truth.

I agree with both statements. Let’s avoid oversimpliciy and let’s have the courage to face the impure and unpleasant parts of our past in order to learn from them and move on.