Why don’t I call The Stone Age Detective a cave-man?

Why have I so far avoided using the term ‘cave-man’ in my blogs?

For many people, the term ‘cave-man’ carries a lot of meaning, but misleading meaning.  We tend to think of a very primitive human, who may not even be homo sapiens. Perhaps you think of a neanderthal? You might think of images from Hollywood movies, which mostly give our early ancestors a bad press.

Most people imagine someone of low intelligence, aggressive, violent and selfish. That is not how I see the Stone Age Detective, or most of the characters in the book. I believe that people living around ten thousand years ago were very similar to us. Their bodies and brains were about the same size as ours. They lived in communities and must have cooperated to survive. They made a variety of tools and weapons, which were very good for the purposes for which they were made.

Didn’t cave-man have only a club and a hand-axe?

They didn’t only have the so-called ‘hand-axe’ or multi-purpose flint tool, although they did make them. The quality of stone arrowheads from that period was better than that of similar ones that people made in later ages. Archaeologists think that is because people didn’t depend on them so much once they began farming. They probably had professional flint-knappers in the early Stone Age, who went out of business once most people turned to farming. 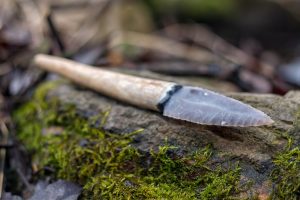 Didn’t cave-man live in a cave?

Not always. We know that people in that period made houses. On Orkney, there are houses of stone that people made in the Stone Age. In the rest of Britain, evidence from post-holes suggests people made houses of timber posts and covered them with skins, thatch and/or turf. Some were so big that large numbers of people must have worked together to build them.  My characters live in a village made of such houses, but use caves at certain times. Does that make the Stone Age Detective a cave-man? You must decide, but don’t expect him to be stupid or bloodthirsty.

For more discussion of the prehistorical background to The Stone Age Detective, see my previous blog.